Bayern Munich limp into the Champions League knockout stages after four first-half Bochum goals downed the Bavarian giants during league action at the weekend. It was a less than perfect backdrop to what should be a difficult trip across the border.

Julian Nagelsmann's side faces a tricky RB Salzburg outfit also familiar with dominating the footballing landscape in their country. The 14-point cushion suggests a ninth Bundesliga title in a row is in the offing for Red Bull's Austrian franchise, yet it is UEFA's flagship domestic competition that takes centre stage on Wednesday.

The timing will be of concern for the locals given that the Austrian top-flight has only just returned. A two-month winter layoff littered with friendlies against sub-par opposition won't provide much comfort. Salzburg’s victory over Rapid Wien post-winter break would have settled nerves ever so slightly, but Die Roten’s arrival provides a different task entirely.

Bayern dominant in the group phase

Six dominant showings from the Germans made light work of Group E, winning home and away against all of Dynamo Kyiv, Benfica, and Europa League-bound Barcelona. Bayern’s imposing campaign to date has seen just three goals conceded and 22 scored, outperforming their already impressive 13.9xG total by some distance.

Grass is green, water is wet, and Robert Lewandowski oozes Champions League goals out of every orifice; nine in six, to be exact. An injury-hit season kept Bayern’s talisman from competing in all of his side’s group games in the 20/21 UCL campaign, missing RB Salzburg’s first-ever competitive fixture vs Bayern.

The two group fixtures between the sides both ended in Bayern’s favour last season, banking the ‘Result & O2.5’ selection in each. A goal-laden 2-6 in Austria set the scene for a 3-1 home win in Germany less than a month later, accumulating 68 shots at goal.

Salzburg, who have registered 75% of their UCL goals at home, have not just scored in each of their three fixtures at the Red Bull Arena, but they also boast a 100% winning record. Despatching Lille, Wolfsburg, and Sevilla under the lights is no mean feat, suggesting that the Austrian champions are rightfully rubbing shoulders with Europe’s elite, and possess the firepower to really trouble them on home soil.

Karim Adeyemi looks set to be playing his European football in Dortmund next season but has a job to do for his current employers first. The young German currently heads Salzburg’s attack with Noah Okafor, both of whom have three UCL goals apiece and will be the likely thorns in a suspect Bayern defence. The Germans have just one clean sheet in their last five, conceding 2+ goals in 4/11 away Bundesliga fixtures this term, something which hasn’t threatened to spill over into European competition. Yet. 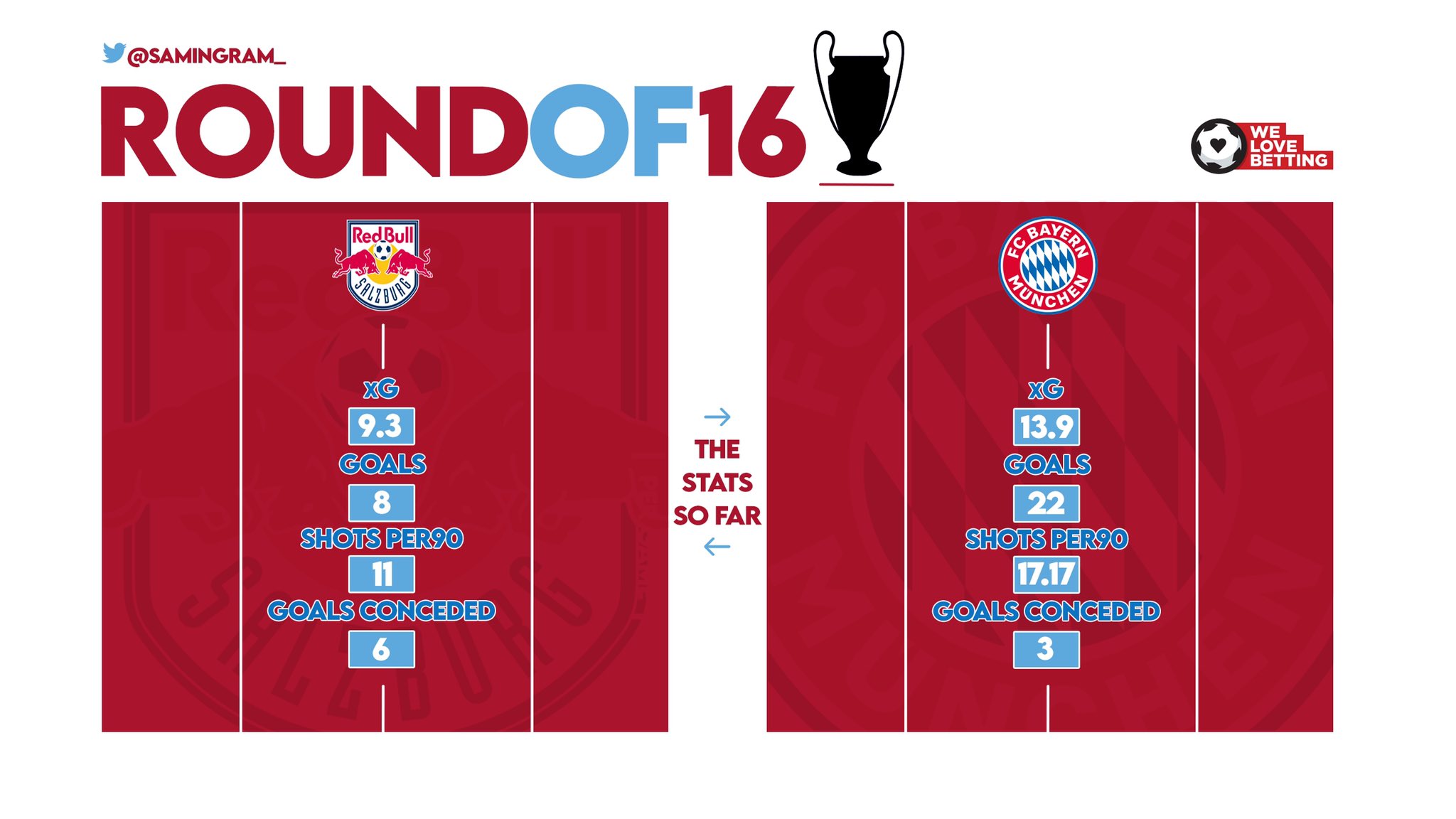 Although the Austrian Bundesliga doesn’t quite match up to the talent on show in Germany’s namesake, it’s worth noting that Salzburg has notched 2+ strikes in 7/9 at home since their July season opener, failing to score just the once. The 9.3 xG amassed from six Champions League games backs up the impressive work in forward areas in their homeland, as head coach Matthias Jaissle readies an eleven to stake a claim for his fourth consecutive home win.

With Nagelsmann’s visiting Bayern side saving their best form for the Champions League, it’s wise to get them on side here. The domestic insecurities on show vs Bochum may well creep into the fixture on Wednesday, but it shouldn’t be enough to derail Sané, Gnabry, Müller, and company from making it seven scalps on the trot. Both to score but Bayern to win at 2.50 with Bet 365 seems generous, given last year's match-ups and either side’s penchant to get on the scoresheet.

Granted, this isn’t quite the formidable Munich side we’ve seen over the years, but they are certainly no slouches. Don’t be too surprised if RB Salzburg is eased aside on Wednesday night just like those left in Bayern’s wake in the opening stages of the competition.