BIG game at the top end of the Championship on Friday night and Sam Ingram (@SamIngram_) shares his views as Bournemouth prepare to face Nottingham Forest.

The Vitality Stadium plays host to a Championship clash involving two bang in-form sides on Friday evening, as the Tricky Trees visit the south coast looking to add to their impressive recent run.

Nottingham Forest boasts the third-best form in the second-tier from the last six outings, pipped by only Fulham and Sheffield United. Steve Cooper's men are currently averaging 2.17 points per game (PPG) from those six fixtures, with the playoffs now firmly in their sights after an impressive run stretching back to the start of December with 9 wins in 13.

Averaging slightly fewer PPG (2.00) in the last six is a new-look Bournemouth sitting 5th in the Championship's form table, fresh off the back of two wins following an active transfer deadline day.

Given both teams waltz into this fixture in top shape with four wins from six, there may rightly be a hesitancy in entering the 1X2 markets or similar. So instead, I've pooled together a bet builder double and a longshot on Bet 365, both focusing on goals and corners that should go close.

Nottingham Forest are no stranger to a goal under Cooper, scoring in eight consecutive games which include two victorious cup ties. An impressive 1-0 win vs Arsenal and the 4-1 dismantling of fellow Premier League opponents in Leicester City show what Forest have up their sleeve.

Personnel-wise, twenty-year-old Brennan Johnson will flag as one to keep an eye on for Bournemouth's analysts, as the forward enjoys a head-turning purple patch, notching five goals in six appearances. Johnson enjoyed a loan spell at Lincoln City in League One for the duration of the previous campaign, proving a nuisance in 43 games for The Imps, scoring 11, laying on five assists, and dragging his club to the playoffs.

Now, after already beating his assist tally from last season and sitting just two shy of his League One goal total, the Welsh international is proving he can mix it with the Championship's best.

Not only that, but his form and glaringly obvious capabilities has placed him at the forefront of Robert Page's plans for the Welsh national squad. Aston Villa loanee Keinan Davis has also shown a wealth of promise alongside Johnson since his January arrival, providing an outlet in attacking areas that will cause defenders at this level all sorts of problems. 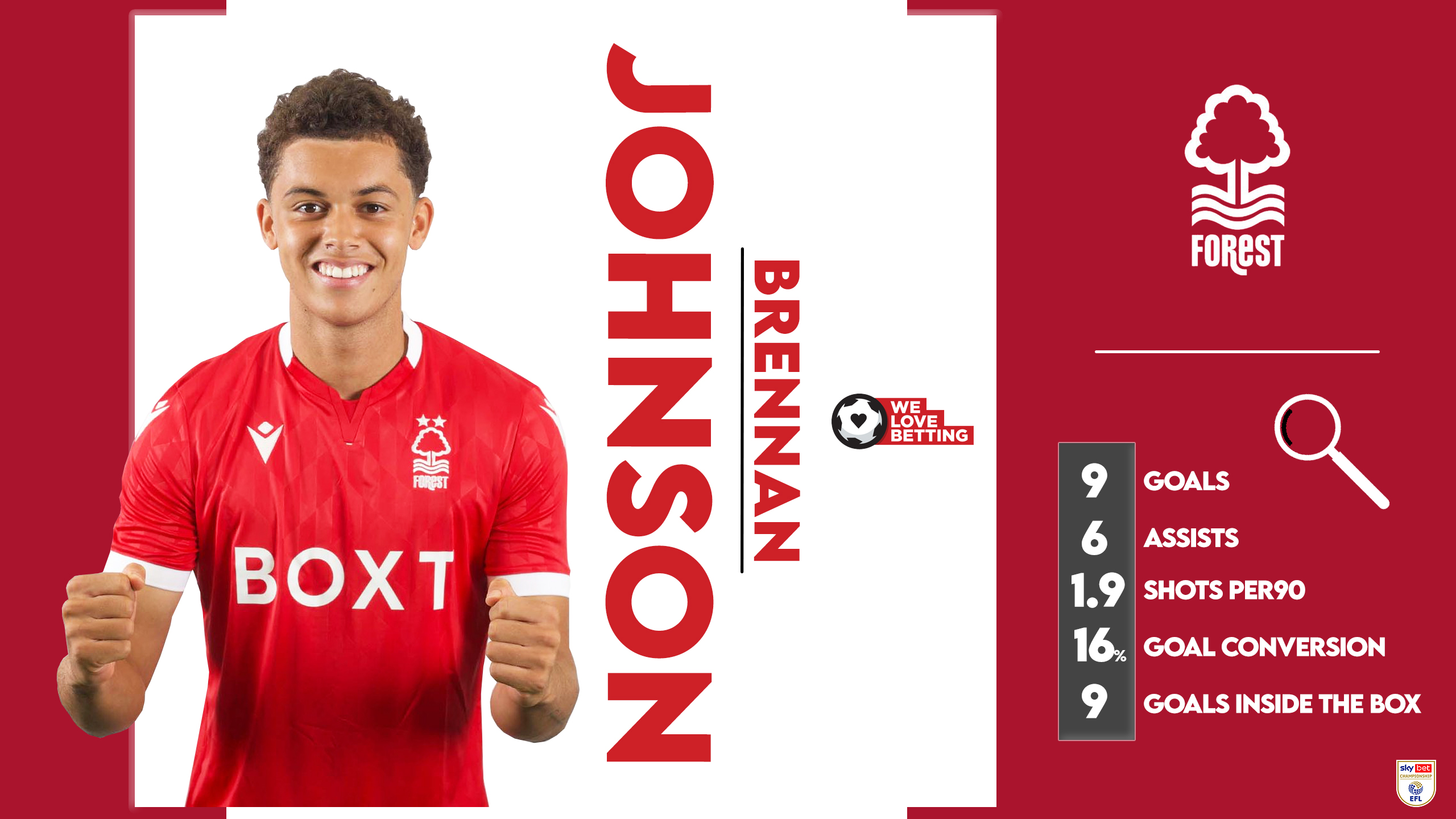 In the Championship, the visiting side for Friday's match-up average 1.47 goals scored per90 on the road. For the hosts, muscling their way onto the scoresheet at the Vitality has come second nature this campaign, averaging 2.07 goals per game and recording 2+ goals in 11/14. The 1.07 conceded per90 average for The Cherries should give Forest hope.

Yet, if anyone is poised to nick Bournemouth a goal to land BTTS, it’s Chelsea academy product Dominic Solanke. Nineteen strikes in 30 appearances stand him as top scorer, with every chance of that edging into the twenties come the weekend.

Moving away from goals, it’s the corner market that may provide another valuable angle. At least nine corners have landed in the last three head-to-heads between the pair. The reverse fixture in August registered 10 flags, whilst last season’s meetings served up nine at the City Ground and twelve down South.

Over the course of this campaign, Bournemouth average 5.21 corners at the Vitality Stadium, whilst Forest’s figure comes up just shy on their travels at 5.13, amounting to double figures as a pair. In terms of conceding, both totals amount to slightly less – 4.71 & 4.60 – accumulating an average of 9+ expected corners on average.

Bournemouth have covered this corner angle in each of their last five fixtures, whilst Forest hit nine in 3/5:

With either side riding a wave of positivity in weeks gone by, I expect chances aplenty after a potentially cagey start. Whether this translates to enough goalmouth action to encourage goals and corners by the hatful is another question entirely, but the stats suggest we may get lucky here.

One thing is for sure for these promotion-hopefuls; the points on offer and the confidence another positive result will bring is invaluable to their aspirations of vacating the Championship.

Bournemouth vs Nottingham Forest – Brennan Johnson to score at anytime, Both Teams To Score and Over 8 Corners (7/1 Bet365)