The Champions League is back in Lisbon, as Amsterdam’s footballing institution stands poised for another assault on Portuguese royalty. Sporting Lisbon wasn't just left in Ajax’s wake in Group C, but more battered, bruised and eased aside on the back of two commanding performances in the Netherlands and Lisbon; the scene for Ajax’s next escapade in Europe.

Six wins from six for Ajax has Erik ten Hag’s squad in esteemed company, with Liverpool’s San Siro win ensuring they make up half of the unbeaten entities in a competition showcasing Europe’s very best. The results on show at The Johan Cruyff Arena this season is one thing, but the performances to accompany the winning machine have been nothing short of sublime on occasion.

The imposing fluidness etched into the DNA of Ajax in full flow, as flair and guile meet youth and a touch of experience to serve up football’s main attraction; goals. And there have been plenty. Not quite the top scorers in the Champions League group stage – Bayern take that accolade, but the Dutch champions’ head-turning tally of 20 suggests there will be no slowing down for a side engineered to score goals.

Ajax’s initial dominance in the 2021/22 instalment of the Champions League is a far cry from what Benfica has mustered to date. Two wins from six, propped up by two draws and a couple of heavy Bayern Munich-inspired defeats, was enough to edge into the knockout stages.

Back goals in Lisbon

Benfica's seven goals flail compared to Ajax's total and are still nowhere near the 16.3 xG racked up by the Dutch outfit, which stood as the biggest xG total throughout the group stages.

Away from European competition, Eredivisie sides will be glad to see the back of Ajax, if only for the one-midweek fixture. The Netherlands' top tier has witnessed 69 goals scored in 22 appearances from this juggernaut of an Ajax side. That's an average of 3.13 goals a game in Ajax colours. Lethal.

It's a similar story in Europe, as you may have expected. Ajax has scored 2+ goals in 6/6 victorious fixtures this campaign. Playing away from home has come somewhat easy so far, with their travels consisting of registering five in Sporting's backyard, three in front of the Yellow Wall, and a double in Istanbul vs Beşiktaş. The 2+ goals scored stat is also impressive domestically, with 16/22 games seeing Amsterdam's best score on multiple occasions.

Considering the above, the 4/5for Ajax to again manage 2+ goals on Bet 365 is something I'm happy to hang my hat on. 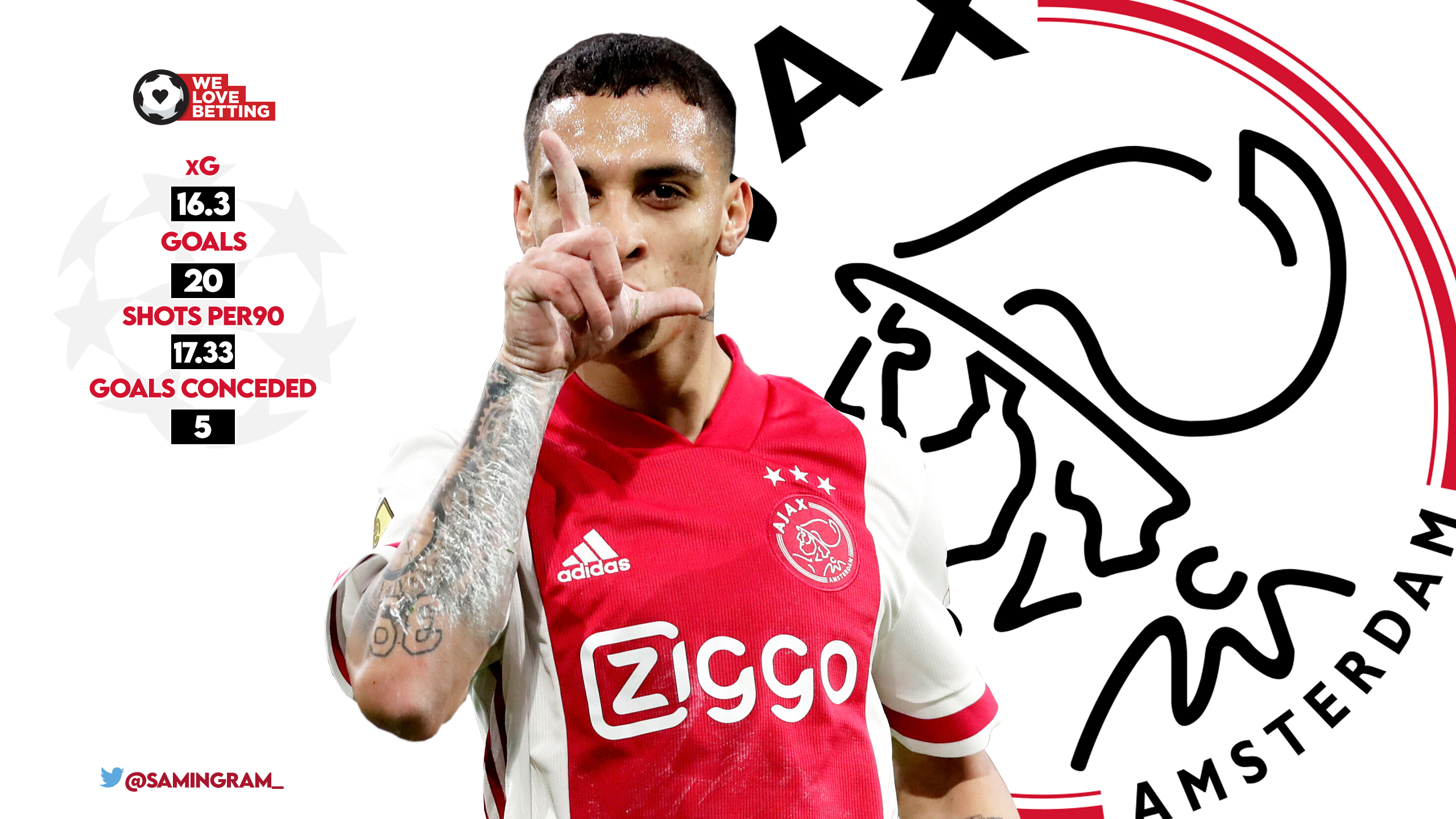 Don't expect Benfica to throw in the towel

So far, this is, admittedly, a betting preview largely focused on the away side. Although I'm banking on Benfica to be the fighter sprawled out on the canvas after the initial rounds, don't overlook them entirely. This Benfica outfit is one full of experience at this level, equipped with a dark arts playbook and the know-how to progress in Europe.

Jorge Jesus' return to Benfica's dugout ended unceremoniously, with his sacking bringing instability and a set of teething problems almost expected amidst the upheaval. Although occupying third and qualifying for the knockout stages of the Champions League, it wasn't enough.

An inharmonious dressing room and a poor run of form and results not afforded to a team like Benfica against the lesser sides ultimately encouraged Jesus' downfall.

Nonetheless, The Eagles' stuttering season isn't all doom and gloom for onlookers of a Benfica persuasion, as the stats suggest. Averaging 2.61 goals per game, Benfica has the highest goals scored per90 average in their domestic league, with Darwin Núñez's 18 goals leading the way amongst the playing squad.

Criminal to some, profitable for others

An alarming precedent set at the Estádio da Luz this season, however, has Benfica topping another set of rankings, but this time, unwantedly – BTTS in fixtures played at home. The leaky defence on show heads into the Ajax tie conceding on home soil in each of the last five games in all competitions, with a Primeira Liga high of 8/11 home fixtures witnessing BTTS.

To add some perspective, cross-town rival Sporting resides at the other end of the rankings with BTTS in just 3/11. Benfica (15/23) are second only to Boavista (17/23) in the BTTS stakes overall.

For a team with such a commanding pedigree in Portugal, Benfica supporters will have you believe that statistics like these verge on criminality.

Coincidentally, Boavista provides Benfica with their ‘warm-up' fixture for the Round of 16, although it didn't go according to plan for the Lisbon natives. Two first-half goals were soon to be drowned out by two late Boavista strikes in the capital; 2-2, and less than perfect preparation.

The 4/6 on offer for BTTS doesn't quite do it for me in terms of value, so getting Ajax on side at the same time is probably the wise play here. Bet 365's goal-centred bet builder offers a suitable way in, with BTTS + Ajax to score 2+ goals at 6/4. If feeling a little bolder and confident that Ajax arrives ready to dismantle Benfica, the 5/2 offered with the same bookmaker for BTTS + Ajax win provides a decent alternative.