The Premier League returns on Wednesday as Aston Villa welcome Sheffield United to Villa Park. These are two very similar sides in the sense that they gained promotion together last season and are both captained and managed by supporters of the club (Jack Grealish and Dean Smith and Billy Sharp and Chris Wilder).

However, their returns to the top tier of English football have played out quiet differently. Pre-season relegation favourites Sheffield United are amongst the pack chasing European football, whilst the Villans – touted to cruise too safety – flirt with the drop, two points adrift from safety.

Therefore, it is no surprise that to see the Blades are the bookies favourites to win this one. 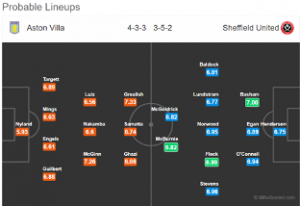 Pictured above are Whoscored.com’s probable line-ups. In a press conference today, Sheffield United manager Chris Wilder reviled that he has a fully fit squad at his disposal. Dean Smith says that McGinn looks set to start while Heaton and Wesley won’t be fit until next season.

Chris Wilder has a full squad to choose from with the Bladesmen coming through unscathed after their three behind closed doors friendlies. pic.twitter.com/tAgOlQinPY

Dean Smith has deployed a few different formations this season. Some tactical switches have been enforced by injury. For example, changing from a back three to a back four in their last Premier League game was a consequence of an injury to Kortney Hause.

However, usually Villa try to straddle the line between being defensively solid and optimising the attacking output of Grealish. This has seen them most commonly opt for a 4-1-4-1 formation with Grealish in left midfield, although in six out of eight of their last league games they’ve played in a 3-4-3, with Grealish operating on the left wing.

Grealish will play a pivotal role if Villa are to survive. He has seven goals this season and six assists, however, equally important is ability to drive Villa up the pitch. For example, he averages 6.82 dribbles per-90 minutes (57% success rate) and 4.43 progressive runs, second to only Adama Traore (5.6).

In defence, Villa try to be as compact as possible in central areas. If operating in a 4-1-4-1 formation, it becomes a 4-3-2-1 out of possession. Their wingers drop behind their striker, with their centre midfielders forming a flat three. This often invites pressure, allows the opposition to have lots of time and space on the ball and leads them conceding a higher than average amounts of crosses.

This is best optimised by the following stats; Villa’s Pressing Per Defensive Action (PPDA) is 12.99 compared to their opponents average of 10.64. In their last game, Leicester attempted 29 crosses versus Villa despite averaging 19.7 crosses this season.

Sheffield United play 5-3-2, an adaptation of a formation first deployed back in League One as Wilder and Alan Knill quickly realised their opposition would often sit far to deep to justify a playing 4-4-2. Instead they opted for a back five in which their left and right-sided centre halves were given license to roam, thus creating the over-lapping centre back role.

This formation allowed Sheff Utd to commit bodies forward consistently, penning the opposition deep in their own half,  allowing them to dominate possession and rack up crosses, corners and shots. This set up has steered the Blades from League One to the Premier League in just three seasons.

Questions were asked if Wilder and Knill would be able to remain loyal to this unique brand of free flowing, attacking football – marauding centre backs and all – in their first season back in the Premier League given the quality they’d be up against. However, with just minimal tactical tweaking they have.

In the Championship, their midfield three was set up with a double pivot in a 5-2-1-2. Ollie Norwood and John Fleck would play centrally and Mark Duffy usually in a more attacking role. This season they’ve switched to a single pivot (5-1-2-2) allowing the midfield three to sit deeper with more emphasis on creating overloads out wide; Norwood in defensive midfield with Fleck and John Lundstrum slightly higher. This has allowed Norwood to be much more influential in possession.

On a game-by-game basis, Sheffield United’s tactics can usually be inferred by their choice of strikers. If they opt for the pace of Lys Mousset or Richairo Zivkovic it means they’ll be taking a more direct approach, probably against a team that press and have a high line. They’ll look to turn their opposition and exploit the space in behind. If one of these players start it may suggest that United will have less possession than usual.

Against sides that deploy a lower block (such as Villa) Wilder usually starts Oli McBurnie and Billy Sharp. The pair have started the last five games up top together, this usually means SUFC will be placing even more emphasis on overloading wide areas and get crosses into the box. In McBurnie and Sharp’s last three starts together, SUFC have averaged 40 crosses per-game – in fact, only Man City, Liverpool and Everton have crossed more often this season then United (659).

The only striker who does not impose much baring on the Blades tactical set up is David McGoldrick, due to his versatility. The Irish international is equally as capable at linking up the play as he is been hit as a target man. If it wasn’t for a broken toe, he would have featured a lot more this season and if it wasn’t for Lundstrum’s big toe he’d have had that all elusive first Premier League goal under his belt.

I can say with some confidence that the Blades will be lining up in a 5-3-2 on Wednesday.

Straight of the bat, I’m recommending a Sheffield United win. The best odds for this are available on Unibet (13/10), however, Bet365 have an ‘Early Payout’ offer that means if Sheffield United go two goals to the good, the bet is settled as a win. The Blades are 5/4 on Bet365.

United are unbeaten against Villa in the last three meetings, convincingly winning two and surrendering a 0-3 lead late on in the sides last meeting at Villa Park. Pre-break, Aston Villa had lost their last five games –  Sheffield United, on the other hand, have not lost in their last six!

United to win and United most corners

McBurnie to score a header

There should be a high volume of crosses for Sheffield United as the tactics of both sides facilitate it. This will suit McBurnie.

Fans of Swansea and Barnsley may be confused to have learnt how much of an aerial presence he poses. He was a detrimental cog in a footballing Swansea side and often deployed as a right winger in his loan spell at Barnsley, both roles a credit to his footballing capabilities. However, at Sheffield Utd he has grown into a role that looks to utilise his aerial presence.

The young Scotsman is currently join-fifth with Watford’s Troy Deeney for the most aerial battles won in the Premier League this season with 137. Averaging 5.30 per-game, he’s only 69 behind leader Sebastian Haller (206).

McBurnie’s aerial prowess could prove a struggle for Villa to deal with as they have the worst defending record in the league, conceding 56 goas. Despite having physically imposing centre-backs in Tyrone Mings (6.4ft) and Björn Engels (6.3ft) the Claret and Blue struggle to dominate in the air. In their previous five fixtures, Engels has only won 33% of his aerial duels, Mings has won a more convincing 80%, but he’s only won 50% of his duels in the penalty area.

McBurnie is available at 9/1 on Sky Bet to score a header. Of his four goals this season, one was a header. It’s also worth noting that a quarter of the goals Aston Villa have conceded this season have come directly from set-pieces, as pictured below.

Personally, I’d wait until the line-ups are announced as it’s not guaranteed McBurnie will start. It’s also worth noting that the price is slightly shorter than I would have liked; I don’t think the volume of substitutes has been factored into it. Wilder has five changes at his disposal which makes the probability of McBurnie lasting the full 90 minutes quite unlikely.

As previously mentioned, I expect Sheffield Utd to have a high volume of crosses in this game. Listed below are their most frequent crossers statistics.

Highlighted are centre-backs Chris Basham and Jack O’Connell. Due to their roles as overlapping centre backs, they get more crosses then the average centre back would. What’s particularly interesting though is the increase in their crosses per-game against the current bottom-six.

Basham’s lower crosses per-game average may mean he’ll be a longer price then O’Connell, however, you must take the opposition into account. Basham could be up against Jack Grealish, he has a considerably higher defensive output then O’Connell’s expected opponent, El Ghazi.

Grealish (29) has successfully completed almost twice as many tackles as El Ghazi (15). He’s also completed more tackles in his defensive third and has a higher-press success rate the El Ghazi.

Therefore, if one of the latter two start then I’ll back the Sheffield United centre back who will be opposing them. For example, if Lansbury starts left central midfield in a four, I’ll be backing Basham in the crossing market.

If Villa line-up as WhoScored.com predict – with McGinn, Nakamba and Luiz in midfield – then I’ll be backing O’Connell in the crossing markets. Just because of El Ghazi has a poorer defensive output in comparison to Grealish.

In terms of price, I’ll be hoping for around evens for two crosses for O’Connell and/or Basham and dreaming of a high price on their max line, though I’ll take anything around 14/1 for five crosses.

In terms of a wager, it’s hard to say without the markets being priced up yet but I think if you combined O’Connell and Basham both to attempt one cross via Ladbrokes or Coral’s Bet Builder function you should get odds of around evens. They have both attempted at least one cross in five fixtures for the Blades against sides in the bottom-six.

My first bet, like most, was on the Grand National. However, I really got into betting when my dad used to go and get me and my brother the slips before home games on a Saturday. At the beginning we’d all pick one away team in a £3 three-fold but soon my brother and I were gathering all our shrapnel and creating the most ambitious accas you could imagine. Unbelievable, I won a 30/1 BTTS acca once. I remember when Birmingham pulled one back to win me the bet in the last seconds of the game, I must of been hooked from then on...